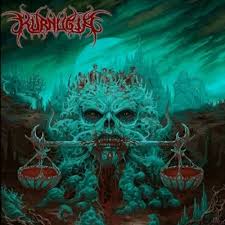 The highly anticipated debut full-length by this U.S. band. Hailing from the rustbelt Metal hotbed of Cleveland, Kurnugia was founded by ex-members of Decrepit, Nunslaughter, Embalmer, December Wolves and Delusion. Not surprisingly, this assembly of seasoned underground veterans is heavily influenced by the classic Death Metal of the early 90's, and that's exactly what Kurnugia aim for: to go back right to the roots of the genre and pay homage to the deeds of old, unaware of gimmicks, trends and mindless experimentation. No more, and definitely no less!

Kurnugia delivered their debut EP, "Tribulations of the Abyss", in 2013 and then followed it with another EP, "Condemned to Obscurity", in 2016. All too teasing have been these short-length assaults, but at last arrives Kurnugia's debut album! Aptly titled, "Forlorn and Forsaken" is ancient aural debauchery, delivered with evil intent, rotting and heinous.

Fittingly, this full-length encapsulates everything Kurnugia have stood for to date: crushing riffery, divebombing solos and tight tank-treads of rhythm, all delivered with swift simplicity of design, but upratcheting the production to a clear and cutting devastation. Well-produced but not "too well-produced", "Forlorn and Forsaken" still seeps with a primordial heaviness rooted in classic Death Metal songcraft, nodding to (but not ripping off) the seminal works of Immolation, Grave, Incantation, Autopsy, Entombed, Cianide, Morbid Angel, Dismember, Death, Unleashed, Deicide and Benediction.

And of course, this classicism is reflected in Mark Cooper's attention-grabbing cover art as well! You can't teach old dogs new tricks, the cliche goes, but you can let those dogs do what they do best: proudly stick to the early 90's traditions of Death Metal. That's been Memento Mori's modus operandi since day one, and we hereby welcome you into Kurnugia's netherworld with "Forlorn and Forsaken"!