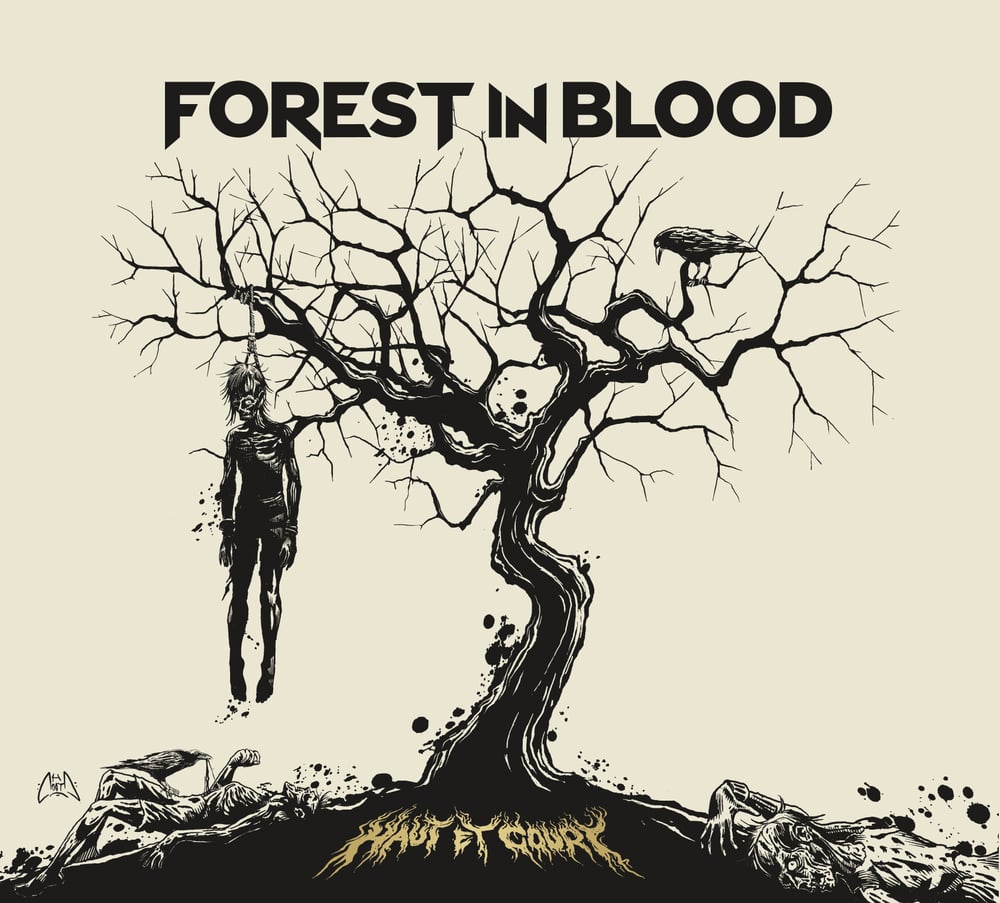 "Haut et Court" is the brand new chapter of brutality by French Hardcore pirates FOREST IN BLOOD !!! 1054 Records are beyond proud to have these longtime pioneers of the French Hardcore / Metal scene join our ranks so get on board & support !!

Founded in Paris France in 1998 a band of friends joined forces & began working tirelessly with the aim of becoming a group that we would not soon forget …. FOREST IN BLOOD.

Their style …. brutal hardcore, combining a mix of SLAYEResque thrash and shattering mosh-parts inspired by groups like HATEBREED, 100 DEMONS & IRATE…

Very quickly a craze is created around the group through crushing live performances, soon the dates multiply & with excellent reviews flowing in from around the scene FOREST IN BLOOD becomes cement their place in the Parisian hardcore scene !!!

In December 2000, FOREST IN BLOOD recorded a Split CD (self produced) with CRY HAVOC under the direction of Spirou (ex-guitarist of MOLODOÏ) and Mario responsible for numerous recordings. This CD, composed of five titles from FOREST IN BLOOD and four titles from CRY HAVOC, now allows the group to distribute their compositions to all parts of France & start building a larger fanbase.

2001 is the year in which FOREST IN BLOOD is definitely known throughout France, but also is starting to make a name for itself in Europe! The group plays headlining in many festivals, but also shares the stage abroad with prestigious groups like MADBALL, LENGTH OF TIME & LIAR… It was also in 2001, they became the first French hardcore group to play in Poland, something that has become common thereafter with them returning there 3 years in a row, becoming extremely popular in the Polish Metal / Hardcore scene.

In 2003 F.I.B. released their first album "What A Wonderful World!". This debut album showcases all the aggressiveness and power that has become a trademark of their live performances, with their brutal mixture of Thrash and NYHC. The album is a success and is sold on loan of 2000 copies. The group goes on prestigious tours from there with NAPALM DEATH and opens for groups like ANTHRAX, HATEBREED, NOSTROMO, & STAMPIN GROUND. ….. FOREST IN BLOOD has now become a key group on the Hardcore scene !!!.

In 2005, the group split up after a change of line-up and devoted itself to the APOCALYPSE NOW project, a much more metal project. They went on to release 2 albums through GSR Music and will perform on 2 GSR tours and a tour in Germany with BACKFIRE and KNUCKLEDUST…

2010 arrives …. the year of the reformation !! The group returns to its first love, Brutal Hardcore. Proud of his experiences, and at the urgent request of the fans, FOREST IN BLOOD recorded in October 2011 a 5-track EP titled "Shameless and Limitless" with Francis Caste (THE ARRS, KICKBACK, APOCALYPSE NOW ...). The result is phenomena l!

2018 marks the 20th anniversary of one of the biggest bands in French hardcore metal and brings the release of a new album titled “Pirates” with many dates confirmed in Belgium, Germany, Poland etc to support the new release !!!

Fast forward to 2020 & the next chapter in the long history of FOREST IN BLOOD begins with the group joining forces with up & coming Australian label 1054 RECORDS for the release of their newly recorded album titled “Haut et Court” !!!!!

Although the COVID pandemic has put a pause on many touring & festival plans rest assured that once things return to some form of normal FOREST IN BLOOD will firmly secure their rightful place on the worldwide Hardcore / Metal map where they rightly belong !!!.